And while I was very critical of Part 1 for some reason, I have a feeling I won’t care too much about what the filmmakers will do with Part 2 because I will be too busy crying.

I had to stop reading “Beauty Queens” because it’s almost my turn to lead the Deathly Hallows book discussion over at Hogwarts Philippines.

My assignment includes a good chunk of the middle part of the book, beginning from The Life and Lies of Albus Dumbledore, up to The Lost Diadem.  There are a lot of details to get through, now that I think about it, but I enjoyed these chapters and I don’t begrudge JKR for indulging herself in peripheral Potterverse. 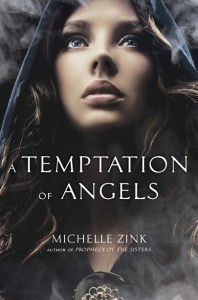 Michelle Zink just posted the final cover of her next book, “A Temptation of Angels”.

“When her parents are murdered before her eyes, sixteen year-old Helen Cartwright finds herself launched into an underground London where a mysterious organization called the Dictata controls the balance of good and evil. Helen learns that she is one of three remaining angelic descendents charged with protecting the world’s past, present, and future. Unbeknownst to her, she has been trained her whole life to accept this responsibility. Now, as she finds herself torn between the angelic brothers protecting her and the devastatingly handsome childhood friend who wants to destroy her, she must prepare to be brave, to be hunted, and above all to be strong because temptation will be hard to resist, even for an angel.”

Except for Lauren Kate’s Fallen series, I’ve never really been interested in picking up any of the other angel-themed books.  But Michelle Zink’s Prophecy of the Sisters trilogy is good, and her writing’s engaging, so I’m actually looking forward to Temptation.

Link Share!  — There is an insightful article at Time.com entitled The Boy Who Lived Forever, which looks into fan fiction in general, and Potter fanfic in particular.  It’s a long read, but it’s good.

I love Brandon Sanderson’s work (Leia calls him my Author Soulmate, but I respectfully disagree…for now. 😛 ) because I appreciate his sense of humor, his intricate characterizations, and, perhaps what he’s most famous for, his unique magic systems.

On his blog, he has an essay entitled “Sanderson’s First Law,” in which he talks about said magic systems and how authors should ideally use them.  He recalls a time when he was berated by fellow fantasy authors for saying “Obviously magic has to have rules.”

And every other person on the panel disagreed with me violently. “If you have lots of rules and boundaries for your magic,” they explained, “then you lose your sense of wonder! Fantasy is all about wonder! You can’t restrict yourself, or your imagination, by making your magic have rules!”

I understand what the other writers were espousing, and though Sanderson later relented and came up with a compromise for his First Law–“An author’s ability to solve conflict with magic is directly proportional to how well the reader understands said magic.”–I still think there should be rules, however basic they may be.  You know, just to make sure girls don’t just go opening doors to Faerie realms because they all-of-a-sudden can (The Gemma Doyle Trilogy), or people don’t just tamper with the Rules of Werewolf Contamination and Transformation (in Linger of The Shiver Trilogy).

I am not biased.

No, siriusly.  If you’ve read enough of his interviews, you’ll probably sort him into Gryffindor, too.

Oh, and one last thing. 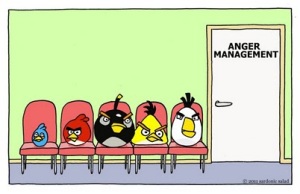