Title: Guardian of the Gate
Series: Prophecy of the Sisters, #2/3
Author: Michelle Zink
Read Date: 7 January 2011
Goodreads Status Updates: Click here.
Review in a nutshell: A solid mythology will get you anywhere… like magical islands, for example.

Synopsis: The ultimate battle between sisters is nearing, and its outcome could have catastrophic consequences. As sixteen year-old Lia Milthorpe searches for a way to end the prophecy, her twin sister Alice hones the skills she’ll need to defeat Lia. Alice will stop at nothing to reclaim her sister’s role in the prophecy, and that’s not the only thing she wants: There’s also Lia’s boyfriend James.

Lia and Alice always knew the Prophecy would turn those closest to them against them. But they didn’t know what betrayal could lead them to do. In the end, only one sister will be left standing.

Guardian of the Gate does not disappoint as a sequel to Prophecy of the Sisters, and it’s a great set-up for Circle of Fire.

Michelle Zink revealed more about the Sisters and the customs of their time, and even more about the Prophecy and Lia’s and Alice’s roles in it. We see Lia settling in to her role as well. It’s always great to see a YA heroine who isn’t just a damsel in distress, or someone who just keeps pining away at the love interest; I like that her strength of character does not feel forced or contrived.

Dimitri is an interesting addition to the cast of characters, and though we learn enough about him, he remains just a little bit mysterious, which is always good. He seems like such a formidable character, I’m not sure if James (from the first book) can stand up to him. 😛

For some strange reason, every time Dimitri is mentioned in the book, an image of Tuxedo Mask from the Sailor Moon series pops into my head: 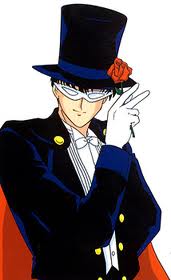 We deal with romance a little bit more here in Guardian compared to Prophecy–James didn’t get as much screen time then as Dimitri got here, sadly–so some of those sections, while sweet, felt a bit too much or out of place, especially considering the sudden and mysterious circumstances of Dimitri’s introduction in the story. I’m apprehensive that Lia fell for him immediately, even though she’s obviously aware of this and of her feelings for James. I just hope that whoever she ends up with in Circle of Fire, Zink would’ve given us a solid, realistic, believable reason for it.

The mythology remains solid here as it was in Prophecy, and Zink generates conflict within the bounds of the Rules she has set for her world. It’s not easy to do this with such a detailed world, and this is one of my pet peeves, so I commend her for pulling it off.

The book starts out slow, but when the story gets interesting (beginning from their journey to the Avalon-esque island of Altus), the plot trots along at a good pace. The denouement felt a bit rushed (I guess I expected a long journey), but loose ends for the story arc of this book were tied up neatly, so we’re good to go for Circle of Fire.
—

Previously, on the Prophecy of the Sisters series:

One thought on ““Guardian of the Gate” by Michelle Zink”