When the folks over at Lionsgate want to release a new promotional photo for The Hunger Games, they do it in style. 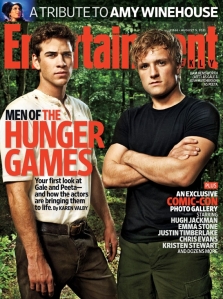 We finally have a good look at Josh Hutcherson as Peeta and Liam Hemsworth as Gale!

To be honest, I was happier when I saw the Jennifer Lawrence photo. I’m not entirely disappointed with the boys–okay, fine, with the MEN–but I’m not ecstatic either.

For the record: in the indie movie adaptation of The Hunger Games that I’m producing in my head, Peeta looks a lot like a younger William Moseley (Peter in The Chronicles of Narnia). I would have also been happy with the likes of Callan McAuliffe or Austin Butler, but I do get why they cast Josh Hutcherson. Callan and Austin may look the part, but they may not exactly be a good fit for JLaw’s Katniss. Casting Josh is a good decision, but that doesn’t mean I like it.

In the meantime, I’ll just pin my hopes on Josh’s acting talent. If he can make me feel something for him when I finally see the movie, then I’ll be on board with Team Josh As Peeta.

So, Bea (a.k.a. Becca Blackfyre) posted this Game of Thrones Name Generator on her Tumblr, and I got: Alysanne Antaryon.

I did some research in A Wiki of Ice and Fire, and it turns out Alysanne is the name of a Queen from House Targaryen, while Antaryon is the family name of The Sealord of Braavos. Braavos is a Free City, and the only one that never became a Valyrian (~ Targaryen) colony. Viserys and Daenerys Targaryen would later spend some time in Braavos as they wander the lands in search of a way to reclaim the Iron Throne.

I can think of an interesting history for Alysanne Antaryon based on all of that, so I think it’s a good enough name to go by while in Westeros.

One thought on “Ladies and Gents, meet Gale and Peeta!”