You know you’re a fangirl when you start talking metaphorical relationships.

I’ve decided to take my author-reader relationship with Brandon Sanderson to the “next level” by finally picking up The Way of Kings (The Stormlight Archive #1). I say this because TWoK is intimidating, and though I sometimes alternate between reading 2 books at the same time, what now holds the record for the longest fiction book I’ve ever tried to read surely deserves my undivided attention. We will therefore be “dating exclusively” in the meantime. As tempting as Rick Riordan’s Son of Neptune is, I don’t think I have the intellectual energy to cheat on Sanderson and this book right now.

My “whirlwind relationship” with him began early this year, when I stumbled upon his stand-alone novel, Warbreaker, which can be downloaded from his website for free.

Though I discovered later that most people don’t consider Warbreaker to be one of Sanderson’s best, I was impressed enough by it to want to start reading his other works. He builds very detailed worlds, and while his stories incorporate the elements that work well for traditional fantasy, he also invents highly original magic systems that adhere to scientific principles.

(Also, Lightsong from Warbreaker is one of the funniest, snarkiest characters ever!)

Several months and 6 books later, here I am, embarking on what is perhaps the most epic of his epic fantasies. 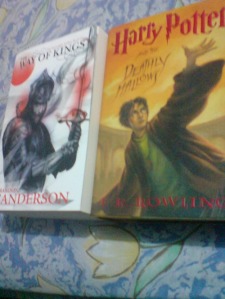 Someone asked me if I’d already read the Wheel of Time books that Sanderson worked on. I haven’t. The Eye of the World (Wheel of Time #1) is waiting in my to-read pile, though. I’m wary about starting something as big as Wheel of Time right now, especially if my only objective is to be able to eventually read The Gathering Storm. I’ve taken to placing TEotW farther down the to-read pile. Sorry, Robert Jordan; it’s not you, it’s me.

So if I ever actually start reading WoT, that would be like being in “a very long engagement.” And if I actually survive RJ’s first 11 books to get to Sanderson’s, then it’ll be like “getting married”.

Speaking of Wheel of Time, Sanderson is auctioning off naming rights for the final book, A Memory of Light. This is a great opportunity for the WoT fans out there!

I’d love to have Sanderson name a character after me, though probably not in WoT. Maybe in a Mistborn or Elantris or Stormlight Archive novel.

If only J.K. Rowling did this naming thing before…

Not in a big-enough-for-a-breakup kind of way.

I’ve been reading other things during lunch and during the car rides to and from work. Mostly it’s just Draco/Ginny fanfics to pass the time, though yesterday, when I heard that they’ve released Sanderson’s Infinity Blade: Awakening e-book, I sought out the preview.

Infinity Blade: Awakening is Sanderson’s first foray into a tie-in, this one with the iPod/iPhone game of the same name. The novella is intended to bridge the original IB game with the new sequel, but people don’t have to play the game to understand the story.

Awakening is set in “a world of mystery and intrigue where magic and technology are indistinguishable, and even life and death are not what they seem.” And boy, does he live up to that promise. Here’s an excerpt from Chapter 2:

He glanced at his ring; its runes weren’t glowing. It hadn’t recharged yet. His hand brushed the throne as he moved, and there was a beep from the magical mirror on the armrest.

That preview was one hell of a teaser. And since this is only available as an e-book, I’m starting to regret not having a damned e-Reader.

So much for cheating.

—
My Reading Progress: The Way of Kings

2 thoughts on “In a (metaphorical) Relationship”