I’ve read all the Southern Vampire Mysteries / Sookie Stackhouse books published so far. It’s a quest that I started last year, after Season 3 of the series ended and I started experiencing what’s known among the fans as “#TBWithdrawal”. I started with Book 4, Dead to the World, because a friend told me that I won’t miss much by not reading the first 3 books if I’ve watched the first 3 seasons of the show. (*waves at Claire* You were right!)

It took me months to track down all of the books in the TV tie-in edition–because I just had to get Book 4 with Eric Northman on the cover in the first place–but it was a fun and rewarding experience because I’ve never tried to catch up on a series this extensive before.

After I finished Book 4, I read on until Book 11, and came back to Books 1-3 afterward. So now, I’m all caught up and ready for whatever craziness Alan Ball will come up with in Season 4, which is loosely based on Book 4.

Episode 1 of Season 4, “She’s Not There”, picks up immediately where the Season 3 finale left off. Sookie, after having her heart broken when she learned Bill’s true reason for coming back to Bon Temps, decided to go with her fairy godmother Claudine to The Mothership Faerie. There, Sookie finds Barry the Bellboy (Season 2), and her grandfather Earl Stackhouse, who disappeared 20 years ago.

All is not as it seems in Faerie, where the…well, fairies, seem to have lured those who have a touch of their blood or their powers (I have a difficult time believing Barry is part fairy). As it turns out, they plan to close off Faerie from the mortal world.

I’m surprised Alan Ball decided to spring this story line so early. While Claudine appeared in Book 4, it’s not until the 8th book that the bulk of the Faerie storyline is further explored after Sookie meets her fairy grandfather Niall. I suppose they had to give a little more credence to the revelation about Sookie’s part-fairy ancestry last season, but all this seems so unnecessary right now.

Anyway, Sookie eventually cottons on to the fairies’ plans and escapes with the help of Claudine’s brother Claude, who, it seems, hasn’t gotten with the fairy program. We see Sookie using her Fairy Princess Powers again, which is strange, because it apparently works against the faeries themselves. Grandpa Earl decides to escape with Sookie, but dies when they get back to the mortal world because he has already eaten the light fruit that they were making people eat on the other side to keep them there. The light fruit are kinda like those lotus flower cakes that they make you eat at the Lotus Hotel and Casino in the Percy Jackson movie.

Granddaddy Earl and the Glowing Fairy Fruit of Forgetfulness

Sookie arrives at her home to find a renovation crew hard at work there. The crew asks her to leave, but calls in the police when she refuses. The responding officer turns out to be Jason, who’s managed to become a deputy in the 12.5 months that Sookie has apparently been gone for. Jason also informs Sookie that he sold the house when it looked like she was never going to be found. and that it was purchased by an unknown buyer.

Nightfall brings Bill Compton, Eric Northman, and later, Sheriff Andy Bellefleur, to Sookie’s house. While Bill laments that he thought Sookie was dead, Eric arrives and asserts that he was the only one who never lost hope that Sookie was still alive. Bill orders him away and he surprisingly complies. Calmly. Which is so not Eric, but we’ll find out why, later.

"Even the people who say they love you gave up on you. I never did." -Eric

This is probably only the 2nd time I’ve seen Eric make an overt play for Sookie’s affections after that talk he had with her last season. Back then, Eric ordered Bill to reveal that his true reason for coming back to Bon Temps was to seduce Sookie upon orders of Queen Sophie-Anne. Throughout the first 3 seasons, Eric has kept his feelings for Sookie very well hidden until that revelation. It looks like things are going to change now.

Meanwhile, Andy isn’t as calm as Eric (because he’s been battling his addiction to V), and he berates Sookie for wasting his time and resources looking for her. Bill comes to the rescue and tells Andy that he sent Sookie away on very confidential vampire business. While Andy didn’t take this well, Jason convinces him to defer the questioning for another time.

Elsewhere, Jesus convinces Lafayette to come with him to a Wiccan gathering at the Moon Goddess Emporium, a Wiccan store owned by the leader of the local coven, Marnie Stonebrook. Marnie is different here. In the books, she travels with her brother, and they are both witches and werewolves. Here, Marnie is a regular witch who appears to be quite docile. Let’s see how this pans out.

In a later coven gathering, the witches manage to resurrect a dead bird. Unbeknownst to Marnie, one of her witches, Alexandra, was planted there by Bill Compton, who is now apparently the new Vampire King of Louisiana. Alexandra later tells Bill that the coven is performing necromancy.

Marnie and her coven

I called the King Bill scenario last year, when I posted about the end of Season 3 on my LJ. This is one of the storylines that have deviated very far away from the books, but promises to be interesting because of the resulting dynamics with Eric, Pam, and Jessica. It’ll also be great to see just what kind of leader Bill is, considering he was once a soldier.

– Nan Flannagan of the AVL is under pressure to rehabilitate the vampires’ image in a “post Russell Edgington world”. She enlists Eric’s help for a PSA, while Bill donates a Senior Citizen Center to Bon Temps. The sequence where Pam tries her hand at being the face of the Fangtasia PSA is hilarious, while Eric’s “Who would you rather trust: a vampire or a politician?” actually made me think. 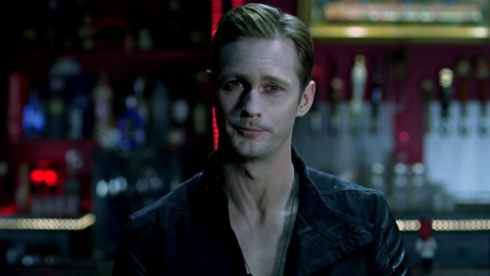 "Who would you rather trust: a vampire or a politician?"

– All is not well in Jessica and Hoyt’s little piece of heaven, and the strain of maintaining a human-vampire relationship is starting to show. No matter how you spin this, Jessica still thinks like a teenager and she’s obviously not ready for this kind of permanent relationship. I don’t see this ending well.

– So Tara did not turn Wiccan while she was away, like I initially thought, though Lafayette and Jesus eventually manage to bring her to a gathering when she went back home to see Sookie. She was apparently hanging out in New Orleans for the past year and has made her name as a cage fighter. Also, she’s now carrying on a relationship with a woman named Naomi. As Tara storylines go, this one’s pretty tame. Maybe the writers will finally cut her some slack.

– Sam is in anger management with Shapeshifters Anonymous after shooting Tommy, while Tommy is now in physical therapy on Sam’s expense. Tommy, meanwhile, was taken in by Maxine Fortenberry, who probably misses having a son at home ever since Hoyt left her. It’s rather sweet, but Maxine really scares me.

– Arlene’s freaky baby, Mikey, continues his alleged “Spawn of Satan” ways. Arlene comes home one day to a pile of headless dolls that Mikey allegedly decapitated. Terry is more optimistic about the situation, but Arlene won’t stop fretting. There must be more to this than Mikey just being an evil baby.

– Jason continues to serve as overseer of the werepanthers of Hotshot…until one of the kids locks him inside a freezer.

– Eric arrives at Sookie’s home and reveals that he was the one who bought her house–a fact that Portia Bellefleur, the attorney that Sookie hired to investigate, hadn’t managed to dig up. Eric bought the house thinking that when Sookie returns, she would eventually be his. On the surface, this is Eric being his usual high-handed self, but I kinda like this reference to the way Book!Eric’s age occasionally manifests itself when he thinks and acts in medieval terms. We don’t see this much in TV!Eric because his attitude seems as modern as his outfits. I like when it happens with Book!Eric, though, since it adds to his charm, so I’m pleasantly surprised to see it depicted here.

Overall, the episode is a great start for the season. And except for my misgivings about the damned Fairies, I’m excited to see how everything is going to turn out.

I’ve come to terms with knowing that Alan Ball is going to stray farther and farther away from the books as the series goes on, but I hope he still maintains most of the overall arcs of the characters because those really turned out well in the books. So far. Although I came really close to losing my patience with Dead Reckoning.

——-
Apologies for the blurry stills. The original files are fine, but I dunno what happens once they’re uploaded here on WordPress. I’ve been having imaging issues on different computers and browsers for a while now.