Want Books? is a weekly meme hosted at Chachic’s Book Nook and features released books that you want but you can’t have for some reason. It can be because it’s not available in your country, in your library or you don’t have the money for it right now. 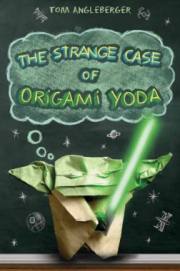 The Strange Case of Origami Yoda by Tom Angleberger
In this funny, uncannily wise portrait of the dynamics of a sixth-grade class and of the greatness that sometimes comes in unlikely packages, Dwight, a loser, talks to his classmates via an origami finger puppet of Yoda. If that weren’t strange enough, the puppet is uncannily wise and prescient. Origami Yoda predicts the date of a pop quiz, guesses who stole the classroom Shakespeare bust, and saves a classmate from popularity-crushing embarrassment with some well-timed advice. Dwight’s classmate Tommy wonders how Yoda can be so smart when Dwight himself is so clueless. With contributions from his puzzled classmates, he assembles the case file that forms this novel.

Darth Paper Strikes Back by Tom Angleberger
It is a dark time at Ralph McQuarrie Middle School. After suffering several Origami Yoda–related humiliations, Harvey manages to get Dwight suspended from school for being a “troublemaker.” Origami Yoda pleads with Tommy and Kellen to save Dwight by making a new case file—one that will show how Dwight’s presence benefits McQuarrie. With the help of their friends, Tommy and Kellen record cases such as “Origami Yoda and the Pre-eaten Wiener,” “Origami Yoda and the Exploding Pizza Bagels,” and “Origami Yoda and Wonderland: The Musical.” But Harvey and his Darth Paper puppet have a secret plan that could make Dwight’s suspension permanent . . .

I’ve had Origami Yoda on my wishlist since last year, and I still haven’t managed to find a copy in a local book store. I feel like I’ve lost some of my Star Wars Fan cred. :p

The posts on the Origami Yoda blog keep popping up on my Twitter and WordPress feeds like constant reminders to “go call the book store to order these or Darth Paper will order the Origami Death Star to destroy your Origami Planet.”

Fine. *prepares to give book store a call*

One thought on “Want Books: The Strange Case of Origami Yoda”