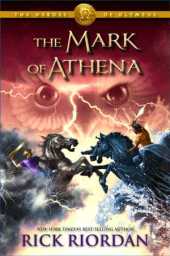 I’ve already said my piece (at least most of it) about “The Mark of Athena” in my review, which was published on GMA News Online (click!). But before I finally close the book on this…well, book, here are two postscripts.

Sis Lianne asked what I thought of the other voices in the book aside from Percy’s.

Actually, I like Percy least in “The Mark of Athena” because of his hyper-awareness when it comes to Annabeth. I think I’m experiencing a kind of “Percy culture shock” considering this is the first time we truly see them together as boyfriend/girlfriend.

“The Mark of Athena” is also the first time I can remember Percy ever entertaining some rather selfish thoughts.

Percy swallowed back his anger. He wasn’t sure if he was mad at Annabeth, or his dream, or the entire Greek/Roman world that had endured and shaped human history for five thousand years with one goal in mind: to make Percy Jackson’s life suck as much as possible.

So when did everything become all about Percy Jackson? But I do get that he is entitled to a bit more angst–1/7 of the fate of the world rests on his shoulders, after all. But that line is rather glaring.

LEO: I liked Leo because his voice is a break from all the angst and the overly-romantic pining. I also love his humor, which is reminiscent of Grover from the first series. It’s difficult to not like Leo, really. More Leo next time, please, Rick.

ANNABETH: Annabeth’s voice didn’t irritate me as much as I initially thought it would. I like that, as in the first series, she’s still very focused on her personal quest. I just didn’t like all the conscious romantic stuff.

PIPER: Oh, Piper. I liked her in “The Lost Hero.” And while I still have a soft spot for her, I didn’t like her PoV much here. She has romantic pre-occupations and insecurities more than the three other voices, and I’m not sure why Riordan chose her rather than Jason or Hazel as a PoV character. It seems there’s a conscious effort to build up Piper, what with her saving Jason several times and all. But the way she’s written…yeah, I just want to hit her on the head with that Relationship Anvil.

Speaking of Jason, the way he’s written here is the opposite of Piper–there seems to be a conscious effort to play his character down a little now that Percy is back–and that’s a pity because I liked him in “The Lost Hero,” too. Despite people saying he’s a Percy substitute and a poor one, I had hopes that he would turn out to be a more distinct and likable character. But I think both Jason and Piper are victims of the books’ “hero troika going on a quest” formula in the first place. This formula is tried, tested, and so loved that you can’t fit new characters into that formula and reasonably expect them to not be compared or to live up to Team Percy. I accepted this for “The Lost Hero” and “The Son of Neptune,” but I expected something more creative in the way these other characters are handled in “The Mark of Athena.”

Aphrodite will not be happy with me

People who regularly read my reviews would attest that I’m all for romance. I am happy for all the characters who have found partners; I just didn’t like that people were being identified or even defined by their relationships, especially in a story like this.

The romance does add to the character development, but I think the themes of coming to terms with who you are and where you’ve come from, of friendship, of courage, of pride and its pitfalls, of learning from history–these are more important to highlight. Riordan managed to strike a balance in this aspect so well in “The Kane Chronicles”, so I expected the same subtle hand here.

I do get why the characters act the way they do. Percy and Annabeth were separated so painfully in the first two books of the series, so the separation anxiety we see here is logical. But I don’t need to see it manifested every time they have to go on separate missions. Piper is understandably insecure because her relationship with Jason is built on a very rocky foundation that is threatened by the ghost of Jason’s past. But it does not do wonders for a character who has to spend an entire quest side by side with the likes of Annabeth and even Hazel.

As I said in my review, there seems to be an effort to age the story up a little because the people who grew up reading the first series are in their teens now, and that’s okay. But other than the romantic pre-occupations, I don’t sense as much maturity when it comes to other aspects of the characters (not that the romance is mature); they seem to act in much the same way they did back during the first book series. I suspect the Quest Formula doesn’t give a character much room to grow, but I’m willing to suspend my final judgment on this until the end of “The Heroes of Olympus”.

Someone who read my review tweeted to me that she feels the same way I do, and she suspects that maybe she’s already starting to outgrow the series. That made me think because I’ve never experienced that before, not even with other children’s books or juvenile fiction. To be honest, sometimes my tastes can be quite juvenile. But I do admit that I didn’t find this book and the characters as funny (except for the Leo stuff and Coach Gleeson singing his own version of the Pokemon song,) or the integration of mythological characters and elements as impressive (Hercules? Meh.)

Do I feel like I’ve outgrown the series? I’m not sure, but I hope not. I do still care for the characters and still look forward to what Riordan is going to put them through. Until I know for sure, I’m going to chalk up all my complaints about this book to the Relationship Anvil that bludgeoned all the other thrills for me.

Yes, Watson. Rick killed This Book on board the Argo II with a Relationship Anvil.