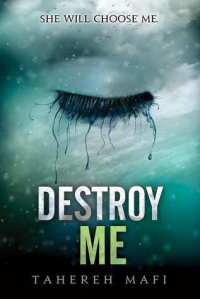 In Tahereh Mafi’s Shatter Me, Juliette escaped from The Reestablishment by seducing Warner—and then putting a bullet in his shoulder. But as she’ll learn in Destroy Me, Warner is not that easy to get rid of. . .

Back at the base and recovering from his near-fatal wound, Warner must do everything in his power to keep his soldiers in check and suppress any mention of a rebellion in the sector. Still as obsessed with Juliette as ever, his first priority is to find her, bring her back, and dispose of Adam and Kenji, the two traitors who helped her escape. But when Warner’s father, The Supreme Commander of The Reestablishment, arrives to correct his son’s mistakes, it’s clear that he has much different plans for Juliette. Plans Warner simply cannot allow.

Set after Shatter Me and before its forthcoming sequel, Unravel Me, Destroy Me is a novella told from the perspective of Warner, the ruthless leader of Sector 45.

*SPOILER WARNING FOR BOTH THIS NOVELLA AND “SHATTER ME”*

It’s great that we now know more about Warner and why he did the things he did in “Shatter Me”, even though he turns out to pretty much be your usual villain who dons a mask of cruelty to hide a troubled past (and present) to the point of driving the love of his life away. It’s a little too cliché, actually, but there’s something compelling about Warner that I am gravitating toward—especially compared to Adam—so I will just have to accept this.

Also, he picked up a dog and happily fed it, so now it’s gonna take something truly devastating to make me hate him after that.

Gorgeous, emotionally compromised men who are nice to women (when they’re not possessed by bouts of noble idiocy or necessary pretense), children, and dogs: there you have it, ladies and gents, my literary male character kryptonite.

The passages from Juliette’s notebook are a great addition here, by the way, as there really isn’t much of the actual content of the notebook in “Shatter Me”. They shed a little more light on Juliette’s captivity (pre-Adam) and how she dealt with her isolation.

“Destroy Me” seems like such an apt title for this novella because, dude, Warner was just crumbling right before my eyes. He falls apart so many times that it’s painful to read. I personally don’t think it’s necessary to paint him this way—in a level of pain that is almost close to Juliette’s—when he didn’t suffer as much as she did. And this difference is magnified even more when the revelations in Juliette’s notebook entries are put parallel to Warner’s trials and tribulations. Sure, he empathizes with her, especially with how they were both treated by their parents. But when you consider how he is in a position of power and privilege, he comes off as too emo, no matter how helpless he actually is when it comes to Juliette. I can still sympathize with him as a reader and understand his motivations as a character even if he were written just a little less emotionally than this.

I wrote about how the portrayal of love can still be epic and thrilling and intense without being suffocating, as Laini Taylor pulled off so well in “Daughter of Smoke and Bone”, and Maggie Stiefvater also did in “The Scorpio Races”. I loved how measured but still swoon-worthy the romance there is, and I wish there was a little of that kind of calculated restraint here and in “Shatter Me”. But the intensity and heightened emotions seem to be part of the style and the theme of the series, and it certainly isn’t something alien in dystopian YA, so I suppose it all comes down to personal preferences, but I just had to say it.

And I thought it was just Juliette, but is thinking in very dramatic similes all the rage in this world? (Loved them at first, but they can get exasperating.) I dread to hear what Adam is thinking.

But…okay, I’ll bite, because I’m a sucker for this tortured love thing sometimes. I’m on board for “Unravel Me”, but the payoff better be something that will rock my world.

Read this novella if:

✻ ✻ ✻
Share Your Story in the Pensieve: What is your literary character kryptonite? (What kind of characters do you most gravitate toward?)