…also sub-titled “In Which I Squee Deep Inside Because I Did Not Freeze Like A Starstruck Fangirl”.

Authors are my rock stars.

Or maybe I’m only saying that because I’ve never met a real rock star or haven’t really fangirled over one. We’ll see. But right now, that is my truth: Authors are my rock stars.

And so whenever I meet one, even those who I’ve already conversed with a lot online (Mina V. Esguerra, Kate Evangelista), I get starstruck. I get nervous before the interview and always forget to ask or say something even when I’ve written all my questions and comments down.

My worst starstruck experience remains to be meeting Neil Gaiman, during which I was shaking the whole time as he signed my book, I shook his hand, and we posed for a photo. It’s a good thing I already wrote my name down on a Post-It and did not have to spell it out for him because I’m pretty sure I would’ve misspelled my own name. And I have no memory of what I said to him or what he said to me. I might have said something weird and unintelligible, so maybe not remembering is a good thing.

I got to interview Peter Lerangis last May 4th. He’s one of my favorite authors in “The 39 Clues” series, and I have a lot of feels for his particular installment, “The Sword Thief”, so I dreaded having another starstruck episode.

I got to the venue later than I should have because of the traffic due to a random rain shower (it happens; it’s more fun in the Philippines!), so my interview was moved to after the signing event. I was a bit panicky throughout the entire program because many of the questions on my list were already asked by either the fans or Ms. Xandra of National Book Store. In the end, I was left with about 4 or 5 questions, which should have added to my starstruck anxiety.

When I finally met him, though, I responded very well to his friendly and welcoming demeanor, and he immediately put me at ease. And I think I lost most of my nervousness during the program because he’s just so jolly and witty and hilarious.

Our short chat went well. We got to talk a little more about “Seven Wonders” and ghostwriting. I got my books signed–all 3.25 of his “The 39 Clues”, and “Seven Wonders”. I think my panda sticky tabs (you can see their ears peeking out the side of the book) amused him because he actually wrote a message for them. 😛 I had to reassure him that the reason there were only a couple of pandas in the latter half of the book is because I got caught up in the action, and not because I fell asleep and found it too boring to merit some more pandas. 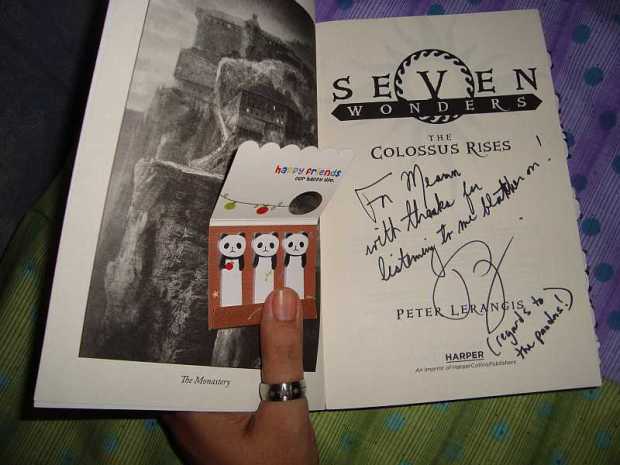 My copies of The 39 Clues, signed by Peter Lerangis

Because he’s such a chocoholic (like me!), I gave him one of my favorite chocolate bars: Alfie’s Bacon Bar. He was so surprised, and I could only smile because that was my exact same reaction when my friend Leia told me that such a thing exists.

When I got my “Shatter Me” books signed, Tahereh Mafi was also amused when she saw the tabs in my books (those were shaped like ghosts). She looked through a few pages to find out what the ghosts were marking, but closed the book after a while because she thought it was like eavesdropping on someone’s reading.

I normally share what my Book Hamsters and Book Ghosts are marking anyway, so here’s a glimpse at some of the pandas:

Any “Star Wars” reference is worthy of a panda. 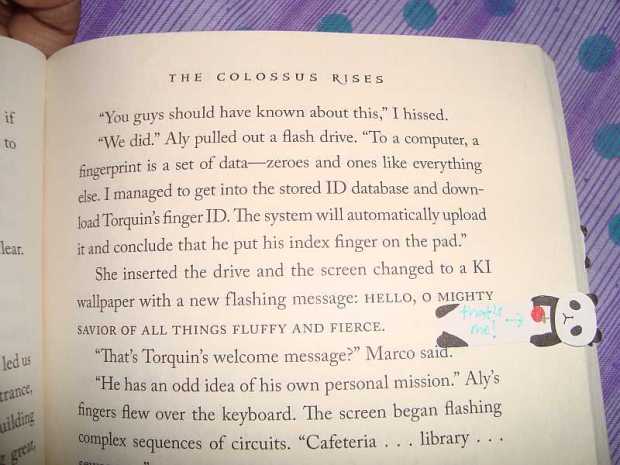 Behold the Mighty Savior of All Things Fluffy and Fierce!

Someone needs to put the Maiden Protection Act into legislation