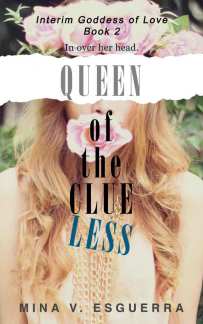 Book 2: Queen of the Clueless

Book 3: Icon of the Indecisive

College sophomore Hannah Maquiling doesn’t know why everyone tells her their love problems. She’s never even had a boyfriend, but that doesn’t stop people from spilling their guts to her, and asking for advice. So maybe it shouldn’t be a surprise when the cutest guy in school tells her that she’s going to have to take on this responsibility — but for all humanity.

The Goddess of Love has gone AWOL. It’s a problem, because her job is to keep in check this world’s obsession with love (and lack of it). The God of the Sun, for now an impossibly handsome senior at an exclusive college just outside of Metro Manila, thinks Hannah has what it takes to (temporarily) do the job.

This is my first time to participate in a blog tour. I’m excited! Yay! I don’t normally sign up for tours because my schedule is erratic, and I’m worried that I will not be able to do my part after I’ve committed. But “Interim Goddess of Love” is special to me because it’s a great story, and I tagged along with both Mina’s and Hannah’s journey from the beginning.

Back when the first book came out, I was able to interview Mina for an author profile for GMA News Online. We talked about a lot of things, but the profile ended up mostly chronicling how she got published—both independently and traditionally—and her aspirations as a writer.

When we did the IGoL Trilogy Audio Commentary, it was Mina’s turn to ask questions. And so I still haven’t managed to ask her things about IGoL and other random stuff. I finally got another opportunity through this tour!

THE GIRL WHO READ: What prompted the idea of an “interim goddess”?

MINA: You know, I don’t remember anymore if there was the idea before the title or if the title inspired it. But I did want to try writing a romance with fantasy elements, I wanted it to be drawn from Philippine myths, and I knew that it had to be about someone learning the ropes. And then it all came together eventually.

TGWR: What did you learn from writing a fantasy romance that you wish you already knew when you started IGoL?

M: I wish I hadn’t been so hung up about the “fantasy” of it. That’s where I got stuck for a long time, just being so intimidated by the fantasy aspect, because that wasn’t my comfort zone. And then later I realized that I was actually writing a type of fantasy fiction all along (because romance is about perfect guys — and we know those don’t exist!), so that made me stop panicking.

TGWR: The IGoL series marked many firsts for you. What do you think is the most significant “first” that you achieved with this series?

M: I love that I can tell myself that I can actually write a novel! It doesn’t appear that way because it’s published as three novellas, but I plotted this as one book and the total word count actually matches what many publishers define a novel as, so yay.

TGWR: Aside from the Goddess of Love, which deity in IGoL has the most interesting story to tell? Can you give us an idea?
If you can be an “interim goddess” of something, which realm in your IGoL world would you like to take over temporarily?

M: Putting these two questions together, because my answer is: Diego. I think that he is actually a positive force in the world, despite the attitude, and if I ever suddenly took on powers I’d love to have his.

TGWR: What are some of the more important things that an aspiring romance writer should remember?

M: That you’re writing about other people, and not yourself. I keep having to tell myself this, because it can’t be helped, my instinct is often to have characters decide the way I would. But you’re not your characters, and they’ll do stuff that you wouldn’t do, and you have to let them do it.

TGWR: Do you plan to write more YA?

M: Not right now, but I tend to look for variety when I write, so I might end up writing YA again after this adult/contemporary phase is through.

M: Joss Whedon. (He’s written comics, and tons of TV scripts, so he counts yes?) I’ve already shared a table with Neil Gaiman, so I’m using my next wish on Joss Whedon. Because he’s wonderful, and I love his work, and maybe if the locked-room convo turns out well I get to meet an Avenger or two. Maybe!

Thanks for your candid answers, Mina!

As part of the tour, you can join in a raffle to win paperback copies of the “Interim Goddess of Love” trilogy (open to International participants) and a choice of a Team Quin / Team Diego / Team Robbie keychain (for residents of the Philippines only).

Joining is easy! All you have to do is go to RAFFLECOPTER (click!) to register your entries.

May the Goddess of Luck (wait, is there one?) favor you!

If you haven’t read “Interim Goddess of Love” yet, you can check out the following links:

To know more about MINA V. ESGUERRA and her other books, visit her at the following sites: www.minavesguerra.com • Twitter • Facebook • Goodreads