I got to meet the very lovely and bubbly New York Times Bestselling Author slash Hug Machine Stephanie Perkins a couple of weeks ago during the National Book Store-sponsored signing events here in the country.

Like many of the authors who visited before her, Stephanie seemed surprised but very happy to see how many readers and fans she has here. That rock star reception in two cities is definite proof that many people love her books.

What’s so memorable about Stephanie is how she talks to each and every person in line, even if it’s just to ask how they are doing if they are too shy to talk first, or to compliment someone, or to answer a question. And the HUGS! There’s just something about Stephanie that makes you want to hug her. I wasn’t planning to, but after we took a photo, I just had the sudden urge to. I’m not sure how many people she hugged that day in the Manila signing because there were more than 600 people in line. But HUGS for everyone!

She had quite a lengthy and enlightening discussion with NBS’s Ms. Xandra Ramos Padilla and Town and Country magazine’s Ms. Yvette Fernandez before the signing, but what remains most significant to me is her advice for writers:

To all of the writers out there, the number one piece of advice I have for you is to learn how to read like a writer. And what I mean is that when you’re reading a book, take it a little bit slower and be a little more conscious and self-aware. When you’re reading something and you have a reaction— it doesn’t matter what the reaction is. If it’s something funny, or makes you swoon, or scares you, or makes you angry, stop and go back and see how the author made that happen. Good books and bad books can be equally effective. When you’re reading and you go, ugh, terrible! Stop and think why and what you’re not enjoying about it.

Most writers just tell people to read but not why and how, and Stephanie’s advice explains a lot and is, I think, a great practical advice that I will definitely take to heart. Not that I have a novel in the works…I only wish I did. XD 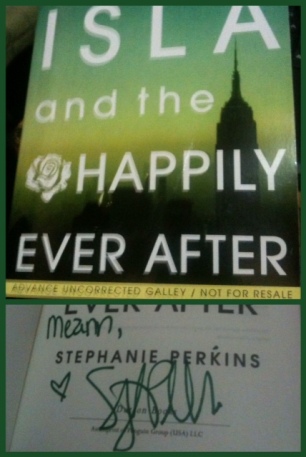 The Guardian reports that Anne Rice has supported a petition for Amazon to implement an identity verification system for reviewers and message board posters in an effort to alleviate the bullying of authors on the site. Earlier this year, Rice herself was attacked by bullies, many posting anonymously or using multiple accounts, when she posted on the Amazon boards.

I didn’t witness the Rice incident, but I certainly followed the Charlaine Harris one. When the ending of the final book of the Southern Vampire Mysteries (a.k.a. Sookie Stackhouse series) was leaked, angry readers cancelled pre-orders and flocked to Amazon and other message boards to rage at Harris. There were many threats to inflict physical harm on her, and many more insults and name-calling.

I have been very unhappy about how the Sookie series shaped up myself, and until now, I have held out on buying the last two books. I can’t blame the people who cancelled pre-orders; it is their right as consumers. It is also within the rights of the fans to be unhappy about the story and to write that they did not like it. But calling Harris names and threatening her is too much.

Like a painting displayed in an art gallery, books are an author’s creative work that is being shared with the world. We are free to critique the paintings and say that the color palette is a visual nightmare or the book’s plot is shitty. But we do not have the right to say that the artist deserves to die or to bombard her webpage and social network accounts with threats or to harass the author with demands that the story end a certain way.

I’m not sure how Rice and the petitioners envision the identity verification system should work, but I’m hoping this also means that the system can alleviate Cyber-Bullying Authors on Amazon, and hopefully in other places like Goodreads as well. We know they exist, and they have a following who can turn into cyber bullies themselves; there is a lot of documentation online that this happened before.

If bullying authors is a problem, then authors who bully reviewers is equally a problem. Like a painting displayed in a gallery, when you publish a book, you open yourself up to criticism, no matter how much those comments stab and poke and bleed out your authorial pride. Authors, of course, have the right to complain against reviewers who go above and beyond just plain snarky or cruel criticisms on their blogs or SNS accounts, especially if death threats are involved and if they cause real mayhem. But targeting readers who blog about your work being shitty, and getting your friends and colleagues to target same readers, is just plain unprofessional.

Reasons Why J.K. Rowling Is My Hero #7:  She can write entire novels by hand.  I fail at this with my measly 1000-word article.  #IWantAQuickQuotesQuill

I cannot write fast enough to save my life. o_0

I should be writing.  Instead, I am thinking of geeky names for Crayola colors. (Gray = Gandalf, Asparagus = Yoda, Tickle Me Pink = Umbridge, Red Orange = Eye of Sauron)