WordPress finally let me in! I haven’t been able to access WordPress.com sites, including my own, for a little more than a week now. I keep getting timed-out of the servers. I’ve done almost everything on WordPress’s Troubleshooting list, but nothing worked. Maybe it’s an ISP issue (although I did not change providers) or something else entirely. But anyway, I can access my dashboard now, so I hope to finish some pending reviews. ^_^

Oh, and Harry Birthday to Harry Potter and J.K. Rowling!

This is so late. 😦 Work has been very hectic lately, what with my new responsibilities and management changes in the company. But I finally have a couple of hours to spare to get more pending blog posts out of the way.

Actually, I already posted a list of my favorite books of 2013 via my GMA News Online year-ender: ‘Daig mo pa ang telenovela’ award and more for the best books in 2013.

I read a few more books that didn’t make that list, though. Some were not released in 2013 either. But for what it’s worth, here are a few more honorable mentions:

Here’s a list of the other titles I read last year, as listed in Goodreads: click! My 2013 Goodreads Reading Challenge target was 52 titles, which I thankfully passed and even exceeded, thanks to my impromptu Crazy Kresley Cole Holiday Readathon (more on that later). My 2014 target is still 52 titles because I don’t trust myself to not get into another reading slump.

I also met a lot of authors this year (Thank you, National Book Store!), some of whom, I interviewed and wrote about.

Author Mina V. Esguerra also invited me to participate in the audio commentary of her “Interim Goddess of Love” trilogy, which is really good, you guys, so read them! 😉

It looks like 2014 will be another busy Bookworm Year, beginning with the author visits of Gayle Forman and Mitch Albom.

This year, I hope to be able to do more concrete things to further my reading advocacy. Back in 2012, when I wrote about a public high school book club’s challenges, I was thankful that that story paved the way for an NGO to donate books to the school. I really hope I will be able to do something more.

Today’s Alibi for not blogging for days: The non-stop rains for the past 5 days finally caused a flood that came to about 1.5 feet high in the first floor of our house, and about 3-4 feet at street level. Cleanup is a bitch. (Also, my Tumblr dash was flooded by many, many fandom related posts. I’ve been staring at too many LJS magazine photoshoots, I may have lost track of a few hours. I know, I know, this particular alibi is worse than “My dog ate my homework”, but it’s better than posting a senseless book review because you’re distracted.) ♫ Now Playing: “Two Weeks” OST — “Run” (Nell); “Love Leaves” (Ahn Ye-seul); “The Day You Come” (Yoo Seung-woo) ♫

Wow, I just realized I didn’t blog for like…a month. So many things to do, so little time!

I got these back when there were movie promos for “Despicable Me”. There used to be about 5 different designs, but I gave away 3 of them to other readers already.

And the reason why these are shot with “Seven Wonders: The Colossus Rises” is it’s also time for another giveaway, which I will be announcing later this week. Stay tuned!

I like looking for patterns in things around me. Maybe that’s why I was drawn to “Fringe,” which is one of my favorite TV shows ever.

This week, it seems, is all about the word “moonlight.”

☽ The song I listened to the most this week so far is “Moonlight Punch Romance” by Nell.


I really love the title and the song itself, so I told my friend Lea:

@rainecaphriel: Moonlight Punch Romance is the name of my fictional band. ^_^

☽ The day before that, we talked about a new Korean variety show called “Moonlight Prince,” which totally has nothing to do with moonlight or royalty. It actually has to do with books, and the concept is something similar to an idea for guest posts that I wanted to implement here but just never had the time to properly do. Maybe I should try to start on this soon; it could be fun!

☽ Lea thought the title of the show is pretty, though, and might be a good one to use for a story or as a username. And so:

“Next time I play a game, I’m going to use Moonlight Princess as a username.” It might be good to save this up for an epic fantasy edition of “Angry Birds.” LOL

Later, this prompted me to remember that I have a history with even more moonlight-related things.

☽ One of my most memorable scenes from one of my favorite Korean dramas last year, “The Moon That Embraces The Sun”, is when the heroine, Heo Yeon-woo, sent the Crown Prince a classical poem as a response to his letter.

It’s such a vivid image that I can almost draw if I had the talent to do so. And it’s also significant in the story because it alludes to both characters’ developing feelings for each other and the painful lesson that they had to learn then: you can’t always have something just because you want it.

☽ One of my favorite movies of all time is “Sabrina,” the one which stars Julia Ormond and Harrison Ford. No matter how many times I watch this movie, I just never get tired of it. And my favorite song from the film is “Moonlight” by Sting:


So there! I just hope this doesn’t mean that if I get zapped by some magical light ray that transforms people into supernatural creatures, I will turn into a werewolf. I’d rather turn into this instead: 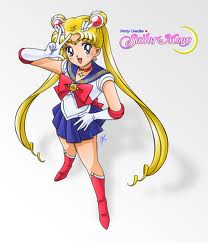 …and wow, I can’t believe May 26th was my last post. I blame work and government procurement. 😛

Time to play catch-up and post some book news and, if I’m lucky (read: if I don’t get side-tracked by kdramas and 1 Night 2 Days episodes during lunch time), maybe post a review or two.

Hey, guys! Sorry this took a while; real life and work got in the way.

Anyhoo, so here’s what the List Randomizer coughed up after I inputted all the entries to TGWR’s Giveaway #2!

Congratulations, Naezel! You win this:

Everyone: Do keep visiting and watch out for the next giveaway! 😉

Welcome to my second giveaway here on The Girl Who Read and Other Stories!

As most of you know, Lauren Oliver was here in the Philippines last weekend to promote the second installment of her Delirium trilogy, Pandemonium. If you missed the book signing event last March 24 at Powerbooks Live, you can listen to my recording of the Q&A or read the accompanying transcript here: click! More important, if you missed having your books signed, then here’s your chance to win a signed copy of Delirium !

Before scientists found the cure, people thought love was a good thing.

They didn’t understand that once love — the deliria — blooms in your blood, there is no escaping its hold. Things are different now. Scientists are able to eradicate love, and the government demands that all citizens receive the cure upon turning eighteen. Lena Holoway has always looked forward to the day when she’ll be cured. A life without love is a life without pain: safe, measured, predictable, and happy.

But with ninety-five days left until her treatment, Lena does the unthinkable: She falls in love.

Here they are, the winners of The Girl Who Read’s very first giveaway!

My sister and I settled on the number 10, which is the number of times we will randomize the list to give all the names in the virtual raffle box a good tumble. I then entered all your entries on Random.org, and my sister hit “randomize” 10 times. This is the result: 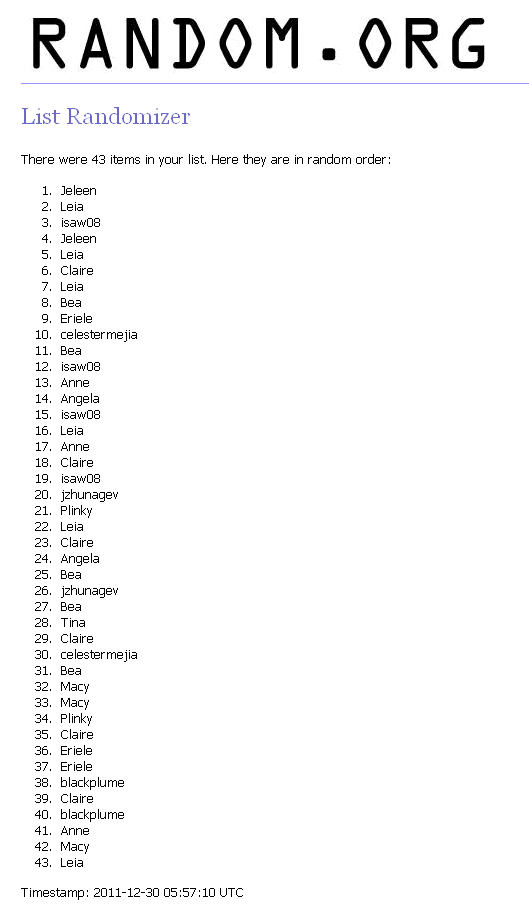 Please send me an email at thegirlwhoread(at)gmail(dot)com with your full name, contact number, and complete mailing address within 15 days. If I don’t get a response by then, the prizes will be forfeited in favor of the next eligible winner on the list.

Thanks for joining, everyone! Keep visiting because there will be more giveaways in the future. 😉

Welcome to my very first giveaway here on The Girl Who Read and Other Stories!

I have one hardbound copy of The Scorpio Races by Maggie Stiefvater and some Forever (The Wolves of Mercy Falls #3, also by Stiefvater) t-shirts up for grabs, courtesy of Scholastic Philippines. I’m happy and excited to give another reader a chance to read Scorpio because I really liked it. 🙂

It happens at the start of every November: the Scorpio Races. Riders attempt to keep hold of their water horses long enough to make it to the finish line. Some riders live. Others die.

At age nineteen, Sean Kendrick is the returning champion. He is a young man of few words, and if he has any fears, he keeps them buried deep, where no one else can see them.

Puck Connolly is different. She never meant to ride in the Scorpio Races. But fate hasn’t given her much of a chance. So she enters the competition — the first girl ever to do so. She is in no way prepared for what is going to happen.

Because it’s the Christmas season and it’s my first giveaway, I’ll make it easy for everyone to send in entries.

1. Post a link to this giveaway in your social network accounts and/or your personal blogs. You can post to as many as you like to increase your chances of winning.

3. In the same comment post, include the answer to this question after your link list: “In The Scorpio Races, Puck and Sean live in a beautiful island called Thisby. On which island in the Philippines do you wish you can live and not leave?” All you have to do for your entry to qualify is to name an island in the Philippines, but you can share your reasons for wanting to live there if you want to; I genuinely want to know! 😉 Your entries are not valid without your answer to this question.

You have until December 29th, 11:59pm to send in your entries. The winner will be determined by a Random List Generator and will be announced before 2011 ends. In case one person’s name appears on the Top 3 twice, that person will get the prize with the higher value (if applicable), and the 4th name on the list will move up to 3rd place.

Important note: This contest is open only to residents of the Philippines. If the winner resides outside of the Greater Manila Area, I’ll send the prizes by courier.

Spread the word, and may the odds be ever in your favor! 😉

I finally got a green-light from my generous sponsor, so tomorrow, I’m going to post the mechanics for my very first blog giveaway!

Check back here tomorrow to find out how you can win a copy of The Scorpio Races by Maggie Stiefvater. 😉

p.s. The contest is open only to residents of the Philippines because I can’t afford the killer international shipping rates, sorry.

The new look of the blog is partly due to The Night Circus (black, white, gray, a splash of rêveur red) and partly due to yesterday’s lunch time I-really-don’t-know-what-came-over-me / maybe-I-should’ve-eaten-a-proper-lunch-before-attempting-to-blog-about-Immortals thing. As you can see, the blog post about Immortals did not materialize. *d’oh!* The blog’s look is going to stay this way for a while, though. Unless something comes over me again. (I do hate it when that happens.) :p