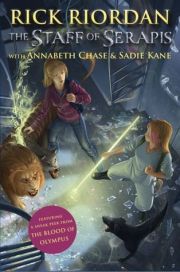 In this adventure, Annabeth encounters more oddities in the subway than usual, including a two-headed monster and a younger blond girl who reminds her a little of herself.

Review Summary: A more cohesive, more imaginative, and mythologically richer crossover than “The Son of Sobek”, but still too formulaic.

Carter Kane is investigating rumored sightings of a monster on Long Island when he runs into something else: a mysterious boy named Percy Jackson. And their meeting isn’t exactly friendly. . . .


“The Son of Sobek” is a dream come true for many Riordan fans as we see a crossover of two of his popular mythological worlds.

Before I even read this short story, I already imagined that Percy Jackson and Carter Kane will get involved in some kind of…well, a pissing contest, really. And hey, what do you know, they did! It was predictable, but of course, since Riordan wrote this, it was also hilarious.

I like that they each had a moment to shine while fighting the Long Island Monster, and that they each were in awe of the other’s powers even though they didn’t understand how everything works. They each had to put their trust in a stranger, and the dynamics of that relationship set in the middle of a battle was definitely interesting to see.

Riordan certainly kept the door open for more crossovers, but for now, I would rather that he make up another new mythological world or focus on finishing “Olympus”.

But really, thanks for this one, Rick. It was fun!