I only noticed this last week, during my…ummm…nth re-watch of “I Hear Your Voice”, a.k.a. My Favorite Korean Drama as of this moment (why? that’s something for another post).

In episode 11, Park Soo-ha (Lee Jong-suk) meets up with his classmates, Sung-bin and Choong-ki. Choong-ki returns the things he found in Soo-ha’s locker the year before after some rather…let’s just say exciting things went down.

Aside from Soo-ha’s journal, headset, and some papers, a copy of the Korean edition of “The Happy Prince” by Oscar Wilde was also found in his locker.

In a town where a lot of poor people suffer, a swallow who was left behind after his flock flew off to Egypt for the winter meets the statue of the late “Happy Prince”, who in reality has never experienced true happiness. Viewing various scenes of people suffering in poverty from his tall monument, the Happy Prince asks the swallow to take the ruby from his hilt, the sapphires from his eyes, and the golden leaf covering his body to give to the poor. As the winter comes and the Happy Prince is stripped of all of his beauty, his lead heart breaks when the swallow dies as a result of his selfless deeds. The statue is then torn down and melted leaving behind the broken heart and the dead swallow which are taken up to heaven by an angel that has deemed them the two most precious things in the city by God, so they may live forever in his city of gold and garden of paradise. (Wikipedia)

The book was probably part of their literature curriculum, although it’s not far-fetched that Soo-ha could have been reading this just for fun.

Maybe the writer wanted this to symbolize something about the characters or the story; she likes that device. Certainly, the prince giving the poor people around him the jewels and gold that were inlaid on his body and the deeds of the swallow are reminiscent of the thread of sacrifice that runs through the drama–of people losing their lives, their innocence, their memories, and even actual body parts–to either protect or avenge their loved ones.

Or maybe I’m just reading too much into this; maybe it was the only book anyone had on set, so it was commandeered as a prop. 😛

Someone posted the following quote on Tumblr:

Fantasy is silver and scarlet, indigo and azure, obsidian veined with gold and lapis lazuli. Reality is plywood and plastic, done up in mud brown and olive drab. Fantasy tastes of habaneros and honey, cinnamon and cloves, rare red meat and wines as sweet as summer. Reality is beans and tofu, and ashes at the end. Reality is the strip malls of Burbank, the smokestacks of Cleveland, a parking garage in Newark. Fantasy is the towers of Minas Tirith, the ancient stones of Gormenghast, the halls of Camelot. Fantasy flies on the wings of Icarus, reality on Southwest Airlines. Why do our dreams become so much smaller when they finally come true?

We read fantasy to find the colors again, I think. To taste strong spices and hear the songs the sirens sang. There is something old and true in fantasy that speaks to something deep within us, to the child who dreamt that one day he would hunt the forests of the night, and feast beneath the hollow hills, and find a love to last forever somewhere south of Oz and north of Shangri-La.

They can keep their heaven. When I die, I’d sooner go to Middle-Earth.”

I read fantasy to REMIND myself there is beauty and magic and goodness in reality. I read fantasy to remind myself that reality itself is changed and shifted by how I look at it. When I fly on Southwest Airlines I always choose a window seat so that I can look at and see the cloud-castles and curve of the horizon and the way the sunlight turns the rivers into liquid gold and lose my ability to breathe because I am not Icarus. I can fly as near the sun as I want and my wings don’t melt because my wings are made up of both fantasy AND reality, wax and canvas and iron and bone wings as strong as I am.

Reality is the whimsical graffiti in the dirty alley in Cleveland. Reality is the chaotic circus of a strip mall where people are bad and selfish and good and welcoming. Reality is seeing the blue sky reflected on the Chicago skyline and thinking I already live in Minas Tirith.

Middle Earth is not better than here. Gormenghast is certainly not better than here. I believe it’s true that fantasy can remind us to listen to the siren songs and relish the color in our real lives. It does spark desires deep within us. But I want my fantasy to remind people that they don’t have to visit hollow hills to find adventure or Oz or Shangri-La to find love. We make ourselves heroes and villains in reality every day. I want my fantasy to remind readers – and myself – that we shouldn’t long for Camelot. We should create it right here.

When I die, I hope I’ve already built my heaven around me.

And to which I say “Amen!” to @odinsbitch.

While fantasy is awesome, the more I read or watch fantasy, the less I am surprised by what people can imagine anymore. The real world, however, is fantastic enough as it is, and the more I see of it, the more I am convinced that it will never cease to amaze me.

EDITED ON 2014.05.10 – My blog stats show that so many people have somehow found this post, likely looking for more information on the book after watching “You Came From The Stars / My Love From The Stars”. After posting this back in January when the drama was airing in Korea, I later managed to find a copy of the book. It’s heartwarming, and in many ways, Edward’s story is reminiscent of Min Joon’s. The rabbit’s journey and experiences with each of the people who manage to find and care for him feels like the many lifetimes Min Joon has had to live since he came to Earth. They both loved and lost and loved again, and eventually, managed to find their way back home.

I’ve added an excerpt from the book below, which is the part Min Joon was reading in the drama.

Soompi ran a story on how the book sold some 30,000 copies (in Korea, I assume) after this episode of the drama “You Came From The Stars 별에서 온 그대” (a.k.a. “My Love From Another Star”) aired.

In the drama, Do Min Joon (Kim Soo Hyun) is an alien who has been living on Earth for several centuries. Just like any self-respecting immortal, he has amassed enough riches to maintain a swanky apartment with an awesome hidden library.

In one scene, he is seen reading Kate DiCamillo’s “The Miraculous Journey of Edward Tulane”, an illustrated (by Bagram Ibatoulline) children’s book.

“Someone will come for you, but first you must open your heart. . . .”

Once, in a house on Egypt Street, there lived a china rabbit named Edward Tulane. The rabbit was very pleased with himself, and for good reason: he was owned by a girl named Abilene, who treated him with the utmost care and adored him completely.

And then, one day, he was lost.

Kate DiCamillo takes us on an extraordinary journey, from the depths of the ocean to the net of a fisherman, from the top of a garbage heap to the fireside of a hoboes’ camp, from the bedside of an ailing child to the bustling streets of Memphis. And along the way, we are shown a true miracle — that even a heart of the most breakable kind can learn to love, to lose, and to love again.

Here is the excerpt which Min Joon was reading in that scene. I’ve quoted a few more additional lines to give it some context:

“Once there was a princess who was very beautiful. She shone as bright as the stars on a moonlit night. But what difference did it make that she was beautiful? None. No difference.”

“Why did it make no difference?” asked Abilene.

“Because,” said Pelligrina, “she was a princess who loved no one and cared nothing for love, even though there were many who loved her.”

I’m not sure why the writer picked this part to highlight in the episode, but I feel like the description of the princess somehow reflects what Min Joon thought of Song Yi at this point in the story. 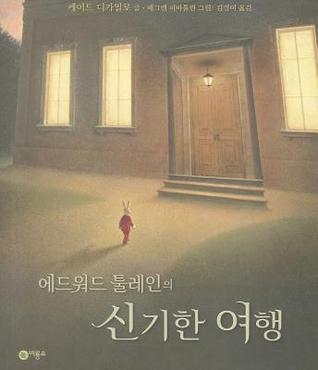 When Soompi wrote that the book was published in 2009 and that it didn’t generate any interest then, they are referring to the Korean edition; the English first edition was published in 2006, and within a span of 2 or so years, it was nominated for and won several awards.

The publishing industry exec that was interviewed made an interesting point: “…that the bestselling status of a work can be influenced by a single broadcast is very bittersweet, reflecting the fragile state of the Korean literary market.” The appearance of the book was about as effective as most product placements in Korean dramas (i.e. very effective)!

I’m no publishing guru, and I have no idea what the literary market there is like, but it’s obvious that this cross-media thing is happening everywhere. Many publishers, especially American ones, know that social networks, movies, television, fandom (just go on Tumblr) and other non-traditional book marketing increase awareness and sales, and exploit those. Those are part of why the Young Adult demographic is alive and kicking…and hey, those are also part of how a K-pop album can sell a million copies.

I write about books and give away books not only because I enjoy it but also, in my own small way, I want to try to make people more interested in reading. Personally, while I think it is disheartening that it has to take a drama to get people interested in reading a certain book, I am nevertheless happy that it got people reading in the first place. I appreciate that the writer used such a public platform to introduce a book that she liked.

Next move for the publisher: invite Kate DiCamillo to do a book signing in Korea and make sure Kim Soo Hyun attends. 😛 (Kidding.) (Or maybe not.)