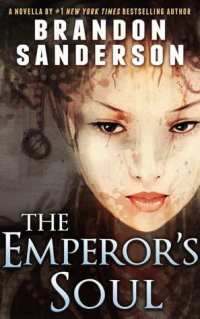 When Shai is caught replacing the Moon Scepter with her nearly flawless forgery, she must bargain for her life. An assassin has left the Emperor Ashravan without consciousness, a circumstance concealed only by the death of his wife. If the emperor does not emerge after his hundred-day mourning period, the rule of the Heritage Faction will be forfeit and the empire will fall into chaos.

Shai is given an impossible task: to create—to Forge—a new soul for the emperor in less than one hundred days. But her soul-Forgery is considered an abomination by her captors. She is confined to a tiny, dirty chamber, guarded by a man who hates her, spied upon by politicians, and trapped behind a door sealed in her own blood. Shai’s only possible ally is the emperor’s most loyal councillor, Gaotona, who struggles to understand her true talent.

Time is running out for Shai. Forging, while deducing the motivations of her captors, she needs a perfect plan to escape…

☠ CAUTION: Detailed discussion ahead. Might be mildly spoilery, though no significant plot points are revealed.

So today is not the day that Brandon Sanderson runs out of ideas for awesome magic systems.

The latest is featured in “The Emperor’s Soul,” his latest novella, which, to be honest, feels like it was written just to showcase the said magic system. Not that that’s a bad thing here because we do get a pretty good character-driven story with the deal as well.

“The Emperor’s Soul” is set in Sel, the same world as Sanderson’s debut novel “Elantris,” so Forgery is also a rune-based system. He got the idea after a trip to a museum in Taiwan, where he saw exhibits of stamps/chops/도장, which are “used in lieu of signatures in personal documents, office paperwork, contracts, art, or any item requiring acknowledgment or authorship. [Wikipedia]” Stamps are still widely used in East Asia, particularly for legal documents.

A Forger has the ability to discern an object’s past, and uses this knowledge to carve stamps that change an object’s nature to transform it into something else. As an example, many of the grand vases in the Emperor’s palace were Forged from simple clay jars. There’s a lot more to the system than that, actually, but I’d have to delve into Sanderson’s Realmatic Theory–the structure of the Cosmere or the universe where all of his epic fantasy works are based. Lest I cause people who read this post to get a nosebleed, I’ll just leave the description of the magic system at that. But if you want to know more…click!

The implications of the system are intriguing in that it tampers with the very nature or the soul of something to transform it. I suppose that, in the end, the only thing that would matter is the result of the magic, and if that is so, then it’s no different from other magic systems. But other systems do not necessarily tamper with an object’s “soul”, only its appearance. In “Harry Potter,” for example, Polyjuice Potion can change your appearance, but the real “you”–thoughts, memories, personality–is intact. Here, a skilled Forger can make a broken stained glass window “believe” that it was restored by a craftsman after it was broken so that it will transform into a beautiful new window. A skilled Forger can make you “believe” that instead of going to an academy, you were enrolled in ninja school, and you will emerge a skilled ninja after the Forger stamps you.

From what I know of you, you could nearly charm the gods themselves.

Another implication that Sanderson explored here and that I liked reading about was the magic’s place in society and how it affects the politics and culture of the world. He does this very well in his epic fantasy novels, so I’m glad to see it in his shorter works as well.

Sanderson keeps the system from producing god-like practitioners by building in limitations. A Forgery will only last as long as the seal sticks and is not rejected by the object (or person); seals need to be re-applied to keep the deception going. And Forgers can only change the nature of something based on its history–Shai couldn’t have produced a beautiful stained glass window from the broken one if it was only ever a regular window. Forger-healers also cannot completely heal someone, which is why Shai wears glasses–she can’t lasik herself a better eyesight because she was born with that defect.

Shai has a lot of depth as a character, which is not easy to pull off in a novella. Throughout the story, you can get a good feel for her motivations, and it’s interesting to see into her mind as her work on the Emperor’s soul progresses. I like her mix of intelligence, bad-assery, and vulnerability.

The only other character who was properly fleshed out was Gaotona, the Emperor’s closest advisor and Shai’s greatest critic; the other characters have just the barest development–something you can probably summarize in a sentence.

Gaotona shares a parallel journey with Shai. He thinks Forgery is sacrilegious, but he is willing to go along with the plan if it means keeping the status quo in the Empire. The more Shai comes to understand the Emperor’s history, so does Gaotona slowly come to understand Shai and why she uses her talent and power the way she does.

There are . . . times when one must accept the aid of darkness in order to contain a greater darkness.

I like the dynamic between Shai and Gaotona, and I like that, in the end, it was Shai’s sincerity that made Gaotona a believer in her art.

“I did manipulate you, Gaotona,” she admitted. “But I had to do it in the most difficult way possible.”
“Which was?”
“By being genuine,” she replied.
“You can’t manipulate people by being genuine.”
“You can’t?” Shai asked. “Is that not how you’ve made your entire career? Speaking honestly, teaching people what to expect of you, then expecting them to be honest to you in return?”

The relative complexity of the magic system makes this prone to a lot of exposition and introspection. I honestly don’t mind it because, as I’ve said before, I like seeing the circuit diagram of the system, so to speak. But for a shorter story like this one, all that exposition can make the story drag. It’s lucky that the plot’s time period–which is equivalent to the Emperor’s mourning period of 100 days–makes it necessary to speed up the events, so I didn’t feel that the story lagged as much as it could have. But overall, there is still that uneven feel to the novella, like there are holes here and there, and it could have sped up here or slowed down there. This feels like it should have been a novel, especially if you compare it with his other recent novella, “Legion”, which came across as more complete and cohesive.

I could have rated this one lower than I did because of that, but I loved how Sanderson brought closure to the characters in what turned out to be a more poetic ending than I expected. Shai’s endless explanations and beliefs about her craft, Gaotona’s doubts, the discovery of what the Emperor was like as a person and a leader–it all came together in the end beautifully, and for this story, that trumps everything else for me…and my sentimental ❤.

I think this is Sanderson’s strongest novella so far, and I really want to see more of this world. If only he had more time to expand it. But first, there’s “Steelheart” and “The Rithmatist” and a “Mistborn” novel and more “Stormlight Archive”…

Hrmmmmm. Maybe he owns a Time-Turner.